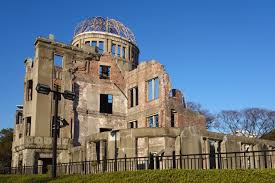 My father experienced a narrow escape from Death,
concretely from atomic bombing in Hiroshima and he was a man of fury and
had a complicated grudge over so many things.
But my mother was always a woman of compassion,
so they would get together well eventually.

I, myself, had never been in Hiroshima since I took a visit there in 2003.
I walked around Hiroshima city and took some pictures of my father’s elementary school,
the place where his house had been, and the Romen-densha or street trains.

Then I made a picture book and sent it to my father.

Yes, now you know the objective of those practice.

It was a kind of pilgrimage to soothe the raging soul of my father.

Now my father is hospitalized because of cerebral infarction and
slightly suffering from dementia. My mother and I take a visit to him in the hospital
every week. He always says to us,” I want to see Kieko badly.”

Kieko is my mother’s name.

They say that the memory of a patient who has dementia goes back to the most
beautiful period. So in most of the cases, the man who is suffering from dementia

has tendency to cry and say ,” Mom! Mom!” ....But my father is different. He is calling

the name of his wife again and again. I have finally realized that

he was NOT a man of fury.

His soul self is a man of LOVE.
But Hiroshima changed him completely.

Honestly saying, I, myself, have got over a long-standing grudge over Hiroshima things and have to add that the visit to Hiroshima by the ex-president Obama made some contribution to that.

Thank you for reading.